In 1989, the powerful Loma Prieta earthquake collapsed a section of the east span of the San Francisco-Oakland Bay Bridge. The event prompted Caltrans to pursue a replacement that would meet current seismic standards. Working closely with the Metropolitan Transportation Commission, Caltrans undertook an extensive design and public review process. The resulting design is not only striking, but also is uniquely suited to the Bay’s challenging geology.

Running from Yerba Buena Island to Oakland, the new structure features a self-anchored, single-tower suspension span across the shipping channel, then transition to a graceful skyway. Whereas the current bridge was double-decked, the replacement features side-by-side decks, affording drivers panoramic views of the San Francisco skyline and the East Bay hills. A 15.5-foot-wide bicycle and pedestrian path runs along the eastbound deck of the 2-mile long structure. With its tower that rises 525 feet above the water and asymmetrical profile, the new bridge is destined to become a distinctive landmark for the San Francisco Bay Area.

The eastern section of the new bridge extends approximately 1.5 miles from Oakland to the newly constructed suspension tower. The eastern section consists of side-by-side decks with five lanes of traffic in each direction. The steel pilings that Ameron produced consist of rolled steel sections in eight-foot diameters using steel plate of up to three inches thick. The pilings were up to 365 feet in length. Manufacturing of the steel sections took place at Ameron’s heavy steel fabrication plant in Fontana, one of the few facilities in the Western U.S. capable of fabricating steel casings of these diameters and thicknesses. “This contract illustrates Ameron’s extensive technical and manufacturing capabilities. It is an excellent example of our stated strategy to grow and to diversify the Company into new products and markets,” said James S. Marlen, Ameron Chairman, President and Chief Executive Officer. 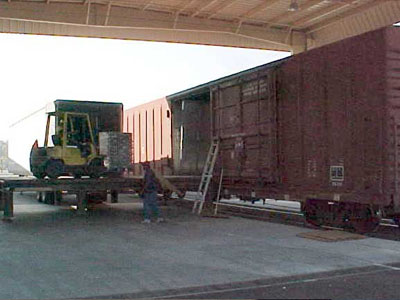 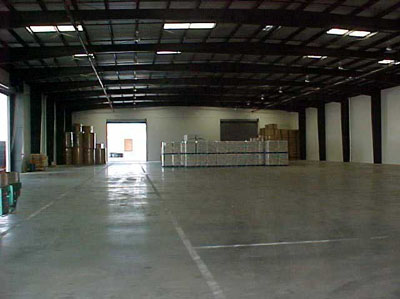 [/su_column]
[/su_row]
We can stack our 30,000 sq ft indoor warehouse up to 28′ high. The DLS facility has four rail spurs, and plenty of open space and equipment to serve the transloading needs of our customers.

During this project, Ameron Steel depended on Dalton Logistical Services to warehouse and transload steel for the Bay Bridge project. Over a million pounds of Ameron steel has been stored at the DLS facility at one point. When it was time for shipment, the steel bars were loaded onto railcars destined for Northern California. There the steel bars were integrated into the special design pilings for the Bay Bride.

Because of DLS’s rail transloading facility and warehouse, this project was a perfect match for Dalton Logistic Services and Ameron. If your company has a need to have material stored, railed or trucked, call our DLS Division Manager, Del Britton at (909)823-0663.